Belinda Steffan is a researcher at the University of Edinburgh Business School.

Belinda’s story is about divorce and how it reinforces some gendered dimensions of economic inequality, such as the gender pension gap and women’s lower life-long financial autonomy. Divorce reduces choice around later-life work and retirement decisions. Drawing on the theory of accumulates (dis)advantage over the life-course, Belinda highlights the need for gendered budgeting policies and education around female financial autonomy throughout the life-course. 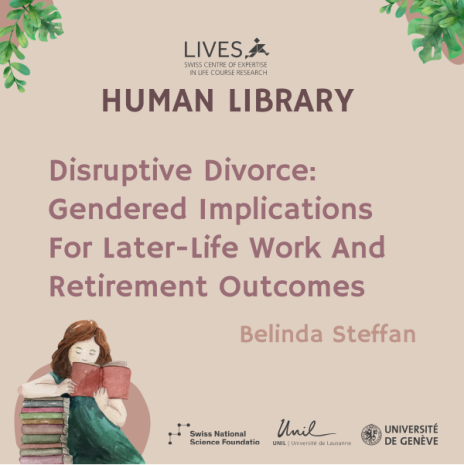 I’d like to introduce you to Alice. Alice is a 50 year old woman who is trying to make her way financially at a crucial turning point of her life. She is a single mum of 2 daughters. Alice has worked her entire life. She left school at 17 and got a job as a secretary in London, she then worked for almost 20 years for the same company, climbing the ranks, taking every chance she had to prove herself within that job, creating a reputation as a valuable member of her team. During that time, when Alice was 28, she married Phil. They bought a house together, and 2 years later had their first daughter, then 2 years after that they had another daughter. At 38, Alice was made redundant, but because she had worked so hard and created a reputation it only took 3 months before she secured a new job. This three months was the only time she had off work except for maternity leave.  She bounced back from redundancy, but with a new job, and a 5 and 7 yo., as well as a mother whose health was starting to fail, she was juggling so many different aspects of her life. When Allice was 39, she found out that her husband was cheating on her. She had known for a year that her relationship was in trouble, so she had been saving in secret. She suspected she was going to have to be a single mum at some point.
Her husband left her 2 weeks before her 40th birthday, leaving the family home. Alice kept the house because she had custody of the girls, to provide stability for their family life and wanted to minimise the domestic disruption. So Alice was a single working mother, living in their family home. She continued to work during that time, commuting an hour in to work and an hour home from work, juggling work, eldercare and raising her daughters the best she could.

But now that Alice is 50, she is legally bound by the term of her divorce to keep the promise she made with her husband 12 years ago. Now that her daughters are grown and leaving the family home, Alice has to sell her home. She is now in a situation where she has to start again at 50, it’s an expensive town, so she has to leave the only city she has ever lived in because she has to repay her husband in accordance with the divorce settlement. Because Alice only worked 3 days a week from having the children to 39, when she was forced to return to FT when she became a single mum. Because of that time working PT she has an underfunded pension. Her reality is that she needs to find a home in a cheaper city that she has never lived in, taking an interest only mortgage and she needs to keep on working. She has a good salary and good job sat, so while she’s happy to keep working for now, she would have liked to be thinking about retirement within the next five years. Instead, Alice talks about retiring at 70 – 20 years in the future. This is because she has to pay her mortgage, a mortgage she wouldn’t have if she didn’t get divorced.

None of these conditions affecting Alice’s retirement age were her fault, events were outside of her control, but for Alice this is her reality. She has always worked hard, she raised two children, but now, at the age of 50, instead of planning her retirement, she is faced with working another 20 years.

I’d like to introduce you to Dave, 57 he is a nurse. Dave left school at 16 and took an apprenticeship as an electrician, he then had several jobs throughout his 20s, but he didn’t really know what he wanted to do, until in his mid 20s he decided to retrain as a nurse. Nursing for him was a calling not just a job. At the age of 26, Dave became a nurse, and he got married to Joan 2 years later, the bought a flat together, then had their first child, then a few years later their 2 child. Because of their growing family, they sold their flat and bought a house together with a sizable mortgage – they didn’t have a lot of money as Joan was also a nurse, working part time as she was the primary carer for their kids. Dave loved his work, but then when Dave was 48 a few things happened to him all at once, which on reflection was a major turning point for him. It all started with a restructuring at work. Dave had a new supervisor who he fell out with and as a result he stopped enjoying his work. His calling stopped being enjoyable and he described his work as a toxic culture. In the same year, Dave was forced to reapply for the same job he had, and was unsuccessful, being forced to move to a different job within the same organisation, and not one of his choosing. On reflection, Dave talks about that time and the stresses of work, and he realised that while his home was a place of solace away from work, but he was also bringing stress home. That same year Dave’s wife, Joan, left, taking the kids with her. They had to sell the family house as part of the divorce agreement, so he bought a small flat, which had to have enough space for the children as he had shared custody. Dave went from living with his family in their family home, working in a job that was more of a calling, to living in a small flat alone, sometimes seeing his kids. He also had time off sick due to the toxic work environment and the knock on effect that had on his domestic life and subsequently his health. Despite this turn in circumstances Dave tried to see the silver lining. Post-divorce he had more disposable income because his wife had so tightly managed the household budget. Divorce was also a time of personal reinvention – he was more resource than he ever felt possible. In the divorce, the assets were split equally in divorce, which mean that Dave had to share his pension. As a direct result of having to share his pension with Joan, while Dave retired at 55 (two years ago), he has had to return to work PT, which he will have to keep doing for the foreseeable future.

This is a story about Bob. Bob is a bus driver, he left school at 16 and like many people in his famly and community did in 1957, and he took an apprenticeship as a mechanic and that job turned in to being a bus driver. He was bus driver most of his 20s, he married Vera at 23 then had 2 children when Bob was 28 and 31, and during that time they bought a house together. When Bob was 39, he and his wife separated. Their divorce was a no fault divorce, and yet it was not a happy one. They agreed on a gendered domestic contract whereby Vera retained the family home because of the kids to give them stability, but because Vera was only working part time, he kept paying for the mortgage and child support, a cost that continued until Bob was 45. During that time, Bob bought a flat and lived on his own. A few things happened at the same time for Bob when he was 45. He was pensioned out of his old job, he registered as clinically depressed, at the same time he bought his flat to live on, on his own. At that time he joined his current employer, and at that time he decided to opt out of the occupational pension because of the cashflow constraints about paying for the family with whom he no longer lived. Bob now talks about life as one of focusing on his health, Bob has some health concerns around his weight and general health (bus driver – job related). He has low job security at 62, and low job satisfaction. Bob has to work another 2 years which might not sound like much but when you’re 62 and you’ve been working non-stop since 16 2 years is a long time. But he had a mortage because of the divorce. Also, when Bob was in his mid 50s he met his current partners and they are due to marry soon. Sadly, Bob has no relationship with his now adult sons because the divorce at the time was not a happy one. So, Bob is getting married next year, so he needs money to pay for the wedding as well as his mortgage. In 2 years time when Bob can finally drives his final bus, he plans to take a PT job that he might enjoy. He now prioritises his health over work, resigned to having to work for longer so he needs to make sure his body can help him do that without the risk of pain or illness. He has a good pension from his years of uninterrupted work, but he doesn’t have enough to retire completely until his late 60s, but he feels that if his next job is enjoyable and his body allows him, then maybe he won’t ever retire.

These three stories represent how divorce can disrupt the life course in terms of financial outcomes, health, family, and well-being at work. Crucially for this story in particular, we’re interested to see how people’s experience of divorce affects choice and control in LLW and R. So just in these three stories alone, we’ve had a number of factors, which influence those choices and control in later life.
Choices made as a teenager around the type of work that is done, then marriage, having children, choices around working FT, working PT. Quite often these choices are gendered, where it is generally the woman, the mother, the wife, who takes time out of FT employment to have children, look after the children and be primary carer. Generally the man, the father, the husband, keeps working FT in line with what we know about the male breadwinner model.

But as these stories show the Male breadwinner model alone is not enough to shield men from having reduced choice and control and LLW and R.
Beyond the financial, it’s aspects such as the infidelity, emotional choices are the time of divorce, really sig choices are made a t time of emo stress. Guilt plays a role, so too does the gendered contract of parenthood. What is interesting to see from these stories is how people in later life, workers over 50 come to terms with the choice and control that they have at that stage because of divorce, working FT PT, pension, retiring and returning, living alone, starting a new family, contact with earlier family. All of these factors contribute to the messiness of divorce within the complex life course of individual workers within a domestic context.