What are the long-term effects of plant closures on workers careers and well-being?

Fiona Köster is a PhD Candidate in social sciences at the University of Lausanne. Due to the Great Recession that started in 2008, several manufacturing plants shut down in Switzerland. Together with Isabel Bauman and Daniel Oesch, she studied the impact on workers career paths and wellbeing after they were displaced due to plant closures. Through the analyzed data they could see that younger workers had it easier than middle-aged ones. Older workers often opted for early-retirement or went through unemployment before they eventually retired. In Fiona’s story, three men are depicted as composite figures for different age groups. 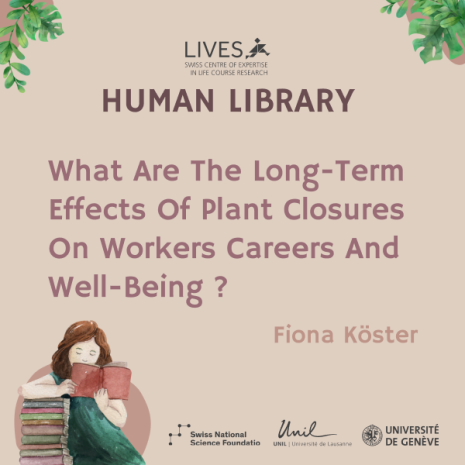 It is a Sunday morning somewhere in Switzerland. And a young man is sitting in his favourite coffee shop, while waiting for his girlfriend to join him. He thinks back towards the time when he first discovered this place. It was a decade ago, just a few days after he was informed that he’d lose his job. His company was forced to shut down amidst the financial crisis that rocked the world in 2008. At first, he was distressed. He was quite fond of his former workplace and colleagues, but he knew there’d be other opportunities out there for him. So he spent his late afternoons and early evenings on job hunting. Wrote application after application. Managed to get several job interviews and finally decided to move to another canton where more and better jobs were available. He was a bit sad that couldn’t quite find what he was looking for in the town that he grew up in. But his job was great and 3 years later he was able to move back and has been happy with his new permanent contract ever since then. In retrospect, the plant closure wasn’t so bad at all. Although it was stressful to look for jobs and to move to another canton, he managed to become a manager, which had his financial perks. Plus, he did not even end up being unemployed but found a new job before the company shut down. With an even higher wage, that kept on increasing over time. Of course, he knows that he’s lucky, because some of his older co-workers seemed to have a harder time. Some apprentices were quite worried as well. Several ones were forced to stop their apprenticeship right in the middle. But quite a few of them were taken in by other companies or started over in another sector. They didn’t face so many troubles either. Caught up in his train of thoughts the man notices the young woman that is walking up to his table a bit belatedly. His face brightens as he realizes that his girlfriend had arrived. Who knows if he would have gotten to meet her, if he wouldn’t have left Geneva for a while and had moved back here to a different neighborhood?

At the same time, not too far away, in another small coffee shop sits a man, who’s in his 50s. He’s focused and concentrated. And has been sitting in front of his laptop for two hours already, sipping the second coffee already. Several websites that offer job opportunities are visible on his screen. He, too, experienced a plant closure around a decade ago. But the outcome of this event was much more unfavourable for him. The manufacturing company that he had worked for at the time, shut down over night, which left him unemployed for quite some time. There was no advanced notice whatsoever. He lost his job over night and was overwhelmed with all of the time that he suddenly had at hand. Not that it would have been leisure time. He was busy looking for jobs, there was nothing enjoyable about that. Since the plant closed down over night he couldn’t even discuss the end of his former career with his colleages. They didn’t have the opportunity to have internal discussions or to negotiate a social plan that could have cushioned their fall. They were left alone to strive and meddle their way through this mess. But even though he was a clerk, and therefore adaptable, it took him one and a half years – until he found a new position. Naturally, he was grateful to finally be able to work again, but it was a fixed-term contract and didn’t even last a whole year. Still, he was content, did his best as a clerk and started to look for a new job 3 months before his contract ended. Though he put a lot of effort in and didn’t care much about the wage, he was unable to find a job in time. His wife wasn’t happy about it and he worried about his children. Although he got to spend more time with them, the uncertainty of his family’s financial situation wore him down. For several years, we went in and out of unemployment and his well-being suffered. He could not rid himself of the nagging feeling that even though he was skilled and trained, others received priority. Why did they not hire him?

Quite often employers didn’t even bother to reply to his applications and he grew increasingly frustrated. Somehow life seemed to be throwing stones in his direction. He was perfectly happy with his job and colleagues a decade ago, but ever since the plant closure happened, he encountered difficulties. His employment situation became more and more unstable until he finally got a permanent contract. But then COVID came around – the economy took a downturn again and he was dismissed. Sure, he wasn’t the only one, but that didn’t console him.

So here he is – again – jobless, exhausted, frustrated. Craving for stability and writing application after application. He wants to work. He doesn’t ask for a mind-blowing wage, he just wants enough to take care of his family. And to feel valued and needed again. He is certain, as soon as he finds a permanent contract – he will be happier

Several hours later bustling noises are echoing through a very similar coffee shop. A group of elderly men and women are sitting around a table – chatting blissfully. It’s been a while since he had last met them. He was glad that they reunited every once in a while. Like himself, most of them had worked their entire life for the same company. They were sad but not shocked that the economic crisis led to the decay and closure of their company about a decade ago. Most of them had experienced the oil crisis of the 70s – so they knew that they could lose their jobs at any time. Luckily, that did not happen, or at least not so early. While most of them hadn’t reached the retirement age, when the company finally shut down, most were above 60 years old already.

That made the option of early retirement feasible and appealing. After all it would have been hard to find a new job at their age. And the company had made provisions. Since they had already experienced an economic downturn several decades ago, the workers agreed to save profits during good years in a fund instead of distributing it right away. Those saved profits paved the way to a generous social plan that helped older workers to bridge the gap.

Sure, they still lost a small proportion of their monthly pensions due to retiring early, but the amount was minimal. Plus, their well-being improved since some of them had worked jobs that were physically demanding up to the very end. He himself, was quite happy that he could spend more time with his wife. And that he got to re-do the garden with his son, before he moved out to study. Although he put his heart and soul into the company, it was a blessing that he was able to retire a bit earlier. In his late years, he found more time to spend with his family, his friends and was able to live out his hobbies to the fullest

Plant closures happen all the time. The circumstances are never the same and some of us cope with them easily while others struggle for a long, long time. But it is important to consider the whole picture.