Cause Commune - Kick-off of projects designed by the residents of Chavannes-près-Renens, for better social cohesion 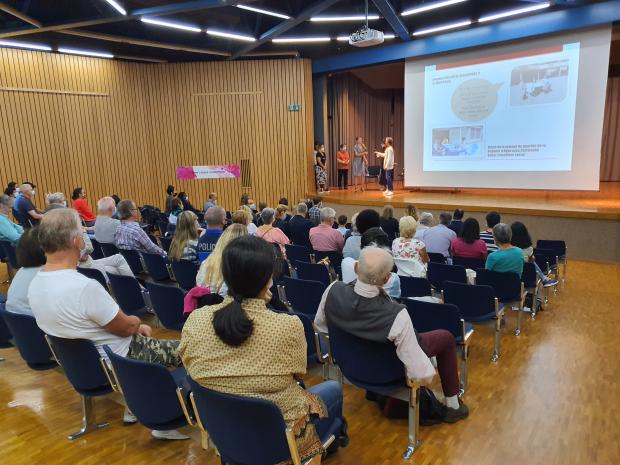 The 2nd Intergenerational Forum of the causecommune project took place on Saturday 4 September at the Aula of the Collège de la Plaine (Chavannes-près-Renens, Switzerland) and brought together more than 100 people involved and/or interested in a friendly, calm, structured and committed atmosphere. This event was organised by the Service de la Cohésion Sociale de la Commune (SCS) and the LIVES Centre. The residents of the southern neighbourhoods, of all generations, presented more than ten very different projects to increase social cohesion:

The representatives of the Municipality expressed their views on these projects and each of them provided concrete ways to move forward by supporting the projects in one way or another.

These projects were in fact co-constructed over a period of more than a year with the socio-cultural referents, but also discussed with the various municipal services: Urbanism - Buildings - Mobility (UBM) and Works - Roads - Environment (TVE). They have therefore had time to mature. Far from being an unrealistic list of requests, the projects presented were widely discussed and consolidated before the Forum. Some of them are in line with visions and projects already implemented and supported by the departments concerned, while others are more the responsibility of the residents and their power of direct action. The Forum - beyond the launch of activities - was therefore also a time for assigning responsibilities among all the present actors.

Generally speaking, all the projects presented will go ahead with the support of the Municipality, the different services, the partners and the academic forces of the LIVES Centre. Some of them without further delay and others in the short or medium term. Of course, depending on the scale of the projects and their complexity, the timeframe for their realisation can vary, which was easily understood by the inhabitants.

As soon as the residents start to animate the meeting place with their activities, a programme will be produced and widely distributed by the SCS (by early 2022) and all the developments carried out by the TVE and/or UBM services will also be the subject of an ad hoc communication (from late 2021, early 2022). In addition, a film on this Forum, as well as on the July 2020 Forum on La Blancherie, produced by A La Vista, is currently being edited and will be available by the end of the year on the municipal website.

The Forum demonstrated that the culture of co-construction has been established in Chavannes after two years of application of the causecommune project and this can be felt. Residents, professionals, researchers, partners and elected officials have all learned to collaborate better, with a better understanding of the issues and areas of competence of each, and this is reflected in greater mutual trust and a valorisation of the different contributions of each. Let's bet that this maturity is a revealing and positive sign, as much for the future of the projects as for that of the social links.

More information is available on the municipal website www.chavannes.ch (local life) and directly from the Social Cohesion Department on 021 640 33 40.