Information evening on the situation of refugees from Syria: history, reasons for exile and conditions of asylum in Switzerland 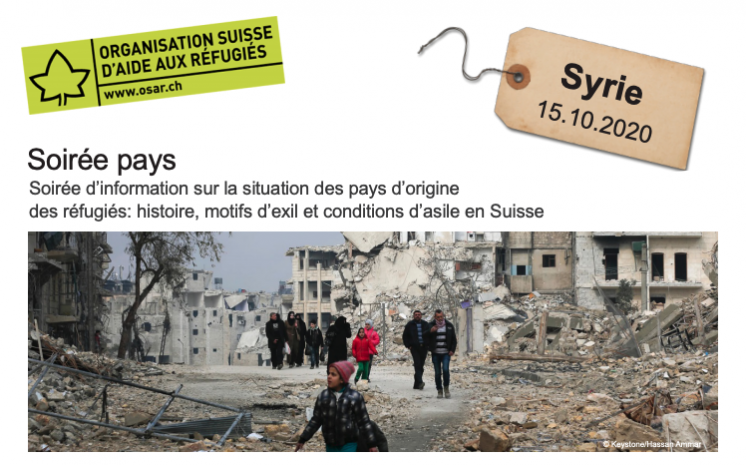 Information evening on the situation of refugees from Syria: history, reasons for exile and conditions of asylum in Switzerland

Since the beginning of the Syrian conflict in 2011, nearly 12 million people have fled their homes, according to the UN. Of these, nearly 6 million are internally displaced and nearly 6 million have found refuge in a neighbouring country, mainly in Turkey, Lebanon and Jordan. In Switzerland, of a total of 14,269 asylum applications, 1,100 were from Syrian nationals in 2019.

Over the years, the Syrian conflict has developed into a complex war, involving rebel factions, jihadist groups and foreign powers. Since 2017, the regime, with the help of its Russian and Iranian allies, has gradually regained control of a large part of the territory. But its presence remains limited in the north-east of the predominantly Kurdish country, in the region of Idleb, controlled by rival armed groups, and in the region of Aleppo and Afrin, controlled by Turkey. Apart from its inability to secure certain regions, the Syrian regime is struggling to exercise its state functions and provide basic services (access to health, education, water/electricity).

During this evening, the speakers will address the current human rights and security situation in Syria, present risk profiles and the asylum policy applicable to Syrian nationals in Switzerland. Organised by the OSAR with the support of the LIVES Centre, the event is open to any public interested in the subject.